The Speedbowl entered the new millenium with significant changes at the track. For the 3rd time since it was originally built, the track property was sold. Waterford Sports Center, Inc, who had bought the property from Harvey Tattersall in February 1989, sold the track to 1080 Hartford Road, LLC a group headed by Terry Eames. Eames had been the track operator & promoter since the 1995 season. 2000 also marked the return of the Waterford Speedbowl operating under a NASCAR sanction for the first time since 1987.  SK Modified drivers became eligible to compete both regionally and nationally with other sanctioned short tracks through the NASCAR Dodge Weekly Racing Series.  The Late Models became eligible for NASCAR’s Exide Shortrack Series.  The NASCAR Featherlite Modified Series would return after over a decade absence and the NASCAR Busch North Series would add the Speedbowl to their schedule as well.

Phil Rondeau once again fell short of a 7th title when he finished 18 points behind Jay Stuart.  The long time rivalry between the two crafty veterans continued throughout the 2000 season.  Stuart led the divisions in wins (6), including the season-opening 50 lapper, en route to the championship and also earned NASCAR’s Exide Shortrack New England Region Championship as well.  Rondeau had 5 wins, while Late Model rookie Chris “Moose” Douton won 4 times and swept the two 100 lap events in his first season in the division.  After season’s end, the American Challenge experiment was over and by the time the 2001 season rolled around, the division was once again called Late Models.

The Strictly Stock division was renamed Sportsman in 2000 and there were 12 different winners during the season, led by Shawn Monahan and Ray Downing Jr who both made 3 trips to victory lane.  Ted Dupre won his first Championship over Diego Monahan.  Chris “Moose” Douton won the season ending 50 lapper on the same day he won the Late Model 100 lap event.  At the time, he joined the legendary Don Collins, who did it over 40 years prior, as the only competitors to win feature events in separate divisions on the same day. Shawn Monahan won the 50 lapper in July, Joe Mancini Jr won the season opening 30 lap event.

To begin it’s 6th season as part of the Saturday night series, the Mini Stocks were moved from their traditional 6pm feature start and became part of the regular rotation of features for the Saturday point divisions.  The 4-cylinder division embraced the main stage with a season long championship battle between the popular drivers Jimmy Pont and Roger Perry which went down to the Finale’s season ending 50 lapper.  Roger Perry’s championship bid collapsed when he crashed into the front stretch wall after contact with Jim Rix Jr.  His crew got him back on the track, albeit many laps down, to an appreciative roar from his fans.  Pont, who finished the race in 4th, capped off a consistent season which included 17 top 10’s, 10 top 5’s, 1 feature win and his first track championship. Perry won the extra-distance 30 lapper to open the season. Jeff Miller and Bruce Thomas won the two 50-lap events.

During the Nostalgia Weekend event on Saturday July 29th, the Speedbowl unveiled their 50 Favorite Drivers list as part of their 50th season celebration. Most of the living members attended the event, which proved very popular with the fans in attendance.

Fox Sports Network had a regional racing recap show in 2000 called New England Dodge Motorsports Weekly hosted by Brett Roubinek.  It featured highlights from many short tracks in the northeast including the Speedbowl.  At the left is a segment with highlights from the Sept 16th event. 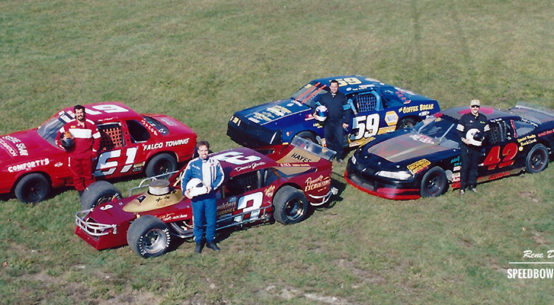